The Royal Astronomical Society announced their award recipients last week, and MIST Council would like to congratulate all that received an award. In particular, we would like to highlight the following members of the MIST Community, whose work has been recognised:
Full details can be found here: https://ras.ac.uk/news-and-press/news/royal-astronomical-society-unveils-2023-award-winners.

There have been some recent ingoings and outgoings at MIST Council - please see below our current composition!:

Nominations for MIST Council open today and run through to 8 August 2021! Please feel free to put yourself forward for election – the voting will open shortly after the deadline and run through to the end of August. The positions available are:

Please email nominations to This email address is being protected from spambots. You need JavaScript enabled to view it. by 8 August 2021. Thank you!

We also move to amend the following articles of the MIST Charter as demonstrated below. Bold type indicates additions and struck text indicates deletions. Please respond to the email on the MIST mailing list before 8 August 2021 if you would like to object to the amendment; MIST Charter provides that it will pass if less than 10% of the mailing list opposes its passing.

4.1  MIST council is the collective term for the officers of MIST and consists of six individuals and one student representative from the MIST community.

5.1 Members of MIST council serve terms of three years, except for the student representative who serves a term of one year.

5.10 Candidates for student representative must not have submitted their PhD thesis at the time that nominations close.

The STFC Solar System Advisory Panel (SSAP) is undertaking a review of the "Roadmap for Solar System Research", to be presented to STFC Science Board later this year. This is expected to be a substantial update of the Roadmap, as the last full review was carried out in 2012, with a light-touch update in 2015.

The current version of the SSAP Roadmap can be found here.

In carrying out this review, we will take into account changes in the international landscape, and advances in instrumentation, technology, theory, and modelling work.

As such, we solicit your input and comments on the existing roadmap and any material we should consider in this revision. This consultation will close on Wednesday 14 July 2021 and SSAP will try to give a preliminary assessment of findings at NAM.

This consultation is seeking the view of all members of our community and we particularly encourage early career researchers to respond. Specifically, we invite:

Comments and input on the current "Roadmap for Solar System Research" via the survey by clicking here.

Short "white papers" on science investigations (including space missions, ground-based experimental facilities, or computing infrastructure) and impact and knowledge exchange (e.g. societal and community impact, technology development). Please use the pro-forma sent to the MIST mailing list and send your response to This email address is being protected from spambots. You need JavaScript enabled to view it..

A white paper called "Quo vadis, European space weather community" has been published in J. Space Weather Space Clim. which outlines plans for the creation of an organisation to represent the European space weather community.
Since it was published, an online event of the same name was organised on 17 March 2021. A “Quo Vadis Interim Board” was then set up, to establish a mechanism for this discussion, which will go on until June 21st.

The Interim Board is composed of volunteers from the community in Europe. Its role is to coordinate the efforts so that the space weather (and including space climate) European community can:

To reach this goal, the Interim Board is inviting anyone interested in and outside Europe to join the “Quo Vadis European Space Weather Community ” discussion forum.

Eligible European Space Weather Community members should register to the “Electoral Census” to be able to vote in June for the final choice of organisation.

This effort will be achieved through different actions indicated on the Quo Vadis webpage and special Slack workspace.

By Daisy May and Ben Sipos (St Gilgen’s School)

Jupiter produces powerful ultraviolet (UV) and X-ray aurorae at the planet’s poles. The emissions take on a variety of dynamic structures, particularly in the swirl and active regions (Figure 1). However, the dark polar region (DPR) consistently demonstrates a lack of auroral emissions. 14 simultaneous Chandra X-ray Observatory and Hubble Space Telescope observations of Jupiter’s Northern aurorae (between 2016 and 2019) revealed that no statistically significant X-ray signature is detectable within the DPR.

There were two potential non-DPR sources that might have contributed DPR photons, that needed to be considered.  The first source was scattered solar photons. By shifting a region the same shape and size as the observed DPR across non-auroral longitudes of the planet, and scaling the photon counts to the duration of the HST observation, we determined the expected number of scattered photons in the DPR for each observation (0.3 to 1.4 counts depending on the DPR size, distance to Jupiter, and solar activity).

The second source was emissions perceived to have come from within the DPR due to the spatial uncertainty of the X-ray Observatory. To determine the count of such photons, we simulated where photons that were produced from the active and swirl regions would have been detected when passed through the spatial uncertainties applied by the X-ray observatory. After 100,000 simulations for each observation, we determined the count of such falsely detected photons, and found that there is no statistically significant X-ray detection from the DPR for these 14 observations.

The lack of x-rays implies low levels of precipitation by solar wind and energetic magnetospheric ions in the DPR. Therefore, the observations are consistent with the DPR being associated with either:  Jupiter’s open field line region and/or the DPR containing different potential drops or an absence of the strong downward currents and/or wave-particle interactions present across the rest of the polar aurorae.

This research project was undertaken with the Orbyts programme which partners scientists with schools to support school student involvement in research and to improve inclusivity in science. This nugget was written by two school students who produced a significant proportion of the work in the associated paper. 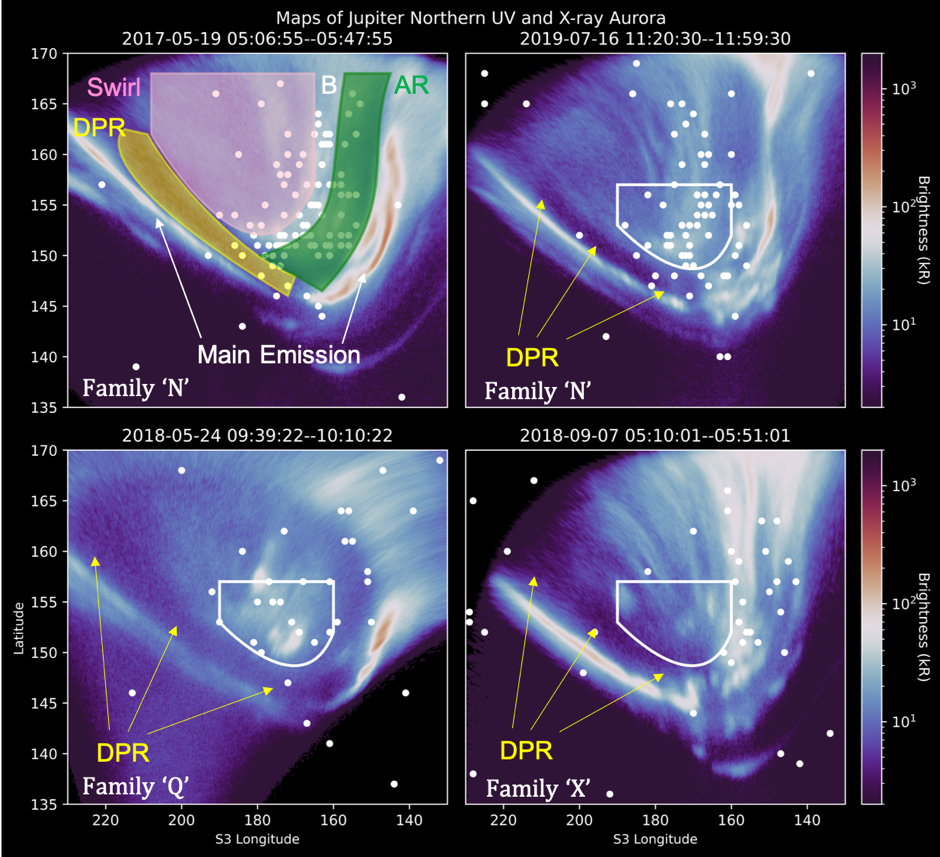 Figure 1: Overlaid simultaneous UV (blue-white-red color map) and X-ray photon (white dots) longitude-latitude maps of Jupiter's North Pole, from the Hubble Space Telescope (HST) and Chandra X-ray Observatory High Resolution Camera (CXO-HRC). Dates and times of the observations (UT) are at the top of each panel. Only UV and X-ray emissions produced during this time window are shown. Jupiter’s main emission is labelled by white arrows, the dark polar region (DPR) is shown in yellow, the Swirl region is shown in pink and the Active Regions (sometimes split into a noon and dusk active region) are shown in Green. The boundary between the active region and swirl region (here labelled with a white “B”) sometimes includes an arc of UV and X-ray emission, as is the case for the two different observations shown in the top two panels here. The other panels highlight three different UV aurora families, as indicated by the white label in the lower left corner of each (Grodent et al. 2018). The white shape overlaid onto each map is consistent across each, and highlights the changing spatial distribution of X-rays for each. For each panel, the location and extent of the DPR are indicated with yellow arrows, showcasing its changing extent from observation-to-observation.